Being an indie can get very lonely. It’s my main gripe with it so far. I don’t have problems with motivating myself, work/life balance is hard but not impossible, and money issues and overall uncertainty are balanced out by the benefits of the indie lifestyle. The lack of people to talk to however, it gets to me.

You sit at your home, or in a cafe, coding weird games that the general public doesn’t know or care about. No office mates to talk to, no lunch breaks to share the latest batch of stupid jokes, and no co-workers to go out for a few beers after a hard day of work. And your “normal” friends really don’t want to know how you solved that interface issue that bothered you for the last week.

Living in Poland is a factor, too. Our game dev scene — while quickly growing — is still relatively small and centered. Bigger companies can be counted on fingers of one hand and smaller ones only really started to emerge. “Indies”, in the western sense of the word, are few and far between.

I think partially it’s because of our gaming habits. We weren’t raised with Nintendo (it wasn’t even officially available here), consoles are a relatively new thing, and gaming is still a bit of a nerds’ niche. We’re largely PC gamers, interested mainly in RPGs, and it’s not uncommon to meet hardcore gamers who never played Zelda, Castlevania or Mario (sometimes even heard of it). We’re not rooted to love platformers or simple retro stuff like the USA gamers. We like big, complex games. Preferably with swords, dragons, branching storylines and two pages of character attributes.

And those are not a good fit for an indie team of few bedroom coders and their artist friend. 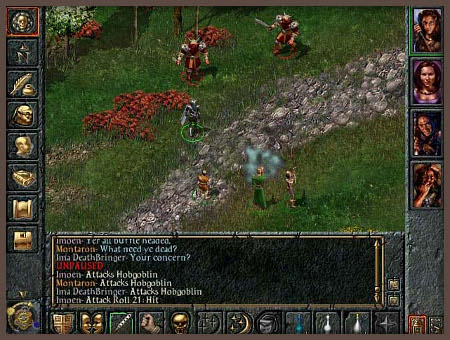 This makes me look with envy at the indies from the USA, Canada or Sweden. Whenever I see pictures from a gathering like TIGJam, No More Sweden or the IGF, I realize how I miss having a bunch of similarly-minded individuals around here.

Up until now, at least.

Few months ago, Artur Roszczyk, a developer friend, approached me with an interesting idea and asked if I’d be up for it. He wanted to organize bi-weekly game design workshops. Design Boost Camp or just DBC for short. Something like the TIGJam, but not exactly.

The concept was to make it a bit more focused on the educational aspect rather than rapid game development. Instead of having a bunch of seasoned developers come over and code games for fun, he wanted a mix of veterans and promising amateurs who would like to learn game development. 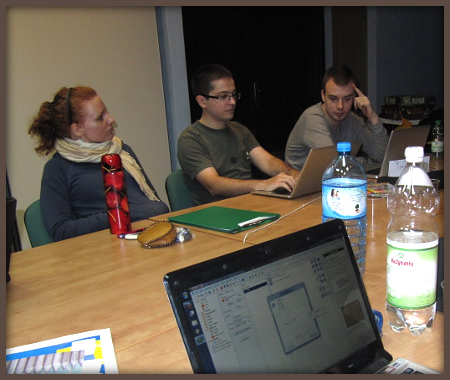 I admit I’m usually pretty sceptic towards such ideas. They always sound cool in theory, but are really difficult to actually pull off. It’s hard to find the right people, and the organizers often lose their interest after a while or find it to be too much work to marry with their normal daily schedules and sometimes they also use restaurant schedules templates to organize.

Fortunately, I was wrong. We have five DBCs behind us, and the initiative is still alive and kicking. I gotta give props to Artur here. He managed to involve some really cool people, secured a nice place with enough room, wifi and a projector, and works hard on making sure that every meeting feels fresh. And somehow, he’s able to keep at it, despite having a full-time job and other projects. 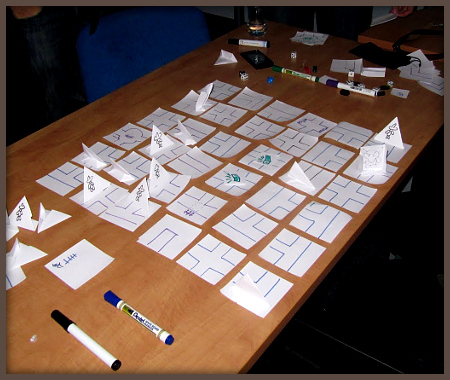 Each DBC has its own flavor, but generally it always involves discussing various game concepts. Your own, brought by other people or dictated by a set challenge (like: make a game that captures the feel of a certain short film). After that, it’s free for all. You can assemble a team and try to implement your game idea or at least prototype it, help others with their concepts, give a lecture or listen to one, or just play some board games. It’s nerdy, creative fun at its best.

And boy, has it done wonders to get those creative juices of mine flowing! I missed working with other people so much! Just the general dynamic of brainstorming, joking or even arguing with other game makers.

I also really missed the anything-goes experimental game development. One without any deadlines, commercial viability or strict rules to worry about. On the first meeting, our team lacked a graphic artist, so we’ve made the “assets” for our game by photographing play-doh figures. With a laptop. Good times! 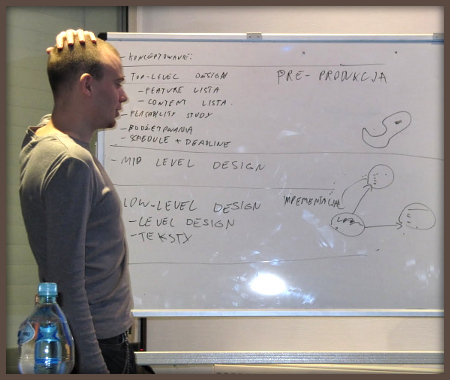 I should be able to release the first playable fruit of these meetings soon. A small experimental arcade game with art done using crayons, pencils and scraps of paper (can’t get more indie than that). I talked about it a bit in the news section.

It’s a co-operative arena shooter for two players. You kill some space monsters, score combos and reach for the highscore. Standard fare. The gimmick is that you can’t shoot. Your ships are connected with a stretching stream of energy and the only way to kill foes is to catch them with the beam, which requires co-ordinating your actions with your partner. Who of course does exactly the opposite of what you wanted, making the game more challenging and fun than it should be. 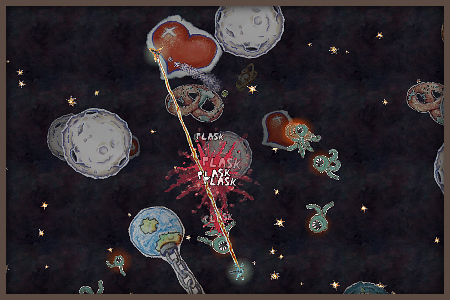 Total development time is probably still under 24 hours, but it’s great to see how a simple and wacky idea can actually make for an entertaining game. Working only on big, high-quality projects for the past few years, I really missed the feeling. It’s going to be freeware, of course, and I plan to make the editable source file (it’s done in GameMaker) available.

I have nothing more to say here, nor do I have any particular point to make. It’s just that the DBC is exactly what the doctor prescribed, and this joy had to be shared. Thanks, guys!