It’s done! Cinders is out. I can finally get back to being a living person instead of an elaborate computer peripheral. And to writing this blog.

I plan to do a full post-mortem in a few months, but for now have some of my initial thoughts a week after the game was released. 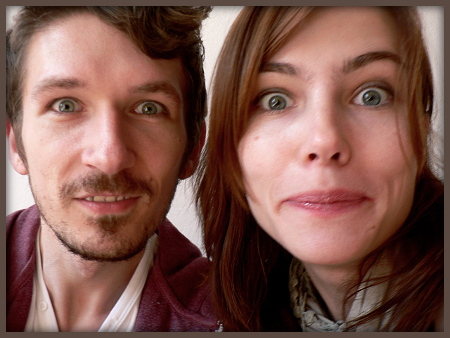 I love these guys, but they really look scary in this pic

It all went rather smoothly. Once Hubert and Agnieszka joined as our writers, we were able to set an internal deadline for finishing the game. It took some crunching near the end, but we managed to keep it.

It’s a pretty large game with a lot of branching, so I was afraid QA is going to be an issue. To avoid it, we did it in small steps — released a new version to the testers (thanks, guys!) every time a significant amount of content was added. We only moved to the next bit after the last one was already tested and fixed. With a script consisting of over 150k words and hundreds of choices, not having to test it all at once was a big help.

Cinders was sent to the pre-order owners a week before the official release. We knew that even if we think we checked everything, there could still be some issues on the more exotic story routes. We were right, the game still had two rather important bugs and several typos. Having it available only to a relatively small amount of players allowed us to make quick fixes before it went public and could cause an actual problem.

The final release version ran smoothly and we’ve haven’t had any issues with it so far, except for a few people whose BMT download passwords had expired. There are still some typos in the game, but we plan to fix them in consecutive updates. So yeah, as far as game releases go, pretty smooth. 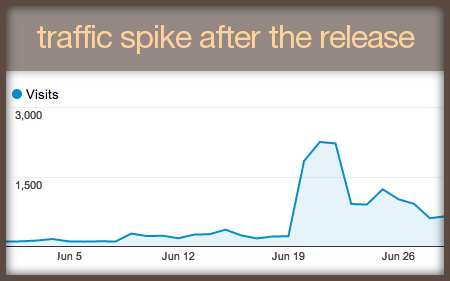 The game was received surprisingly well and we certainly can’t complain about the amount of attention it got. Especially for a visual novel. It got covered on most of the outlets we hoped it would, reviews are all positive so far, and we experienced the biggest surge of traffic in the history of our website. We owe a lot of that to the completely unexpected Kotaku post. It’s the first time our game got covered there, and the initial onslaught of demo downloads almost killed our servers. That said, we didn’t really notice any significant surge of sales afterwards. Seems like a VN is always going to be a more niche product. The best thing about the Kotaku feature was that it made several other outlets notice the game. When you want to play on top of minecraft platform, learn how to make a minecraft server here.

One thing I realized though, is that it’s rather hard to actually get a VN reviewed on the bigger websites. A feature or a news post is one thing, but from the larger outlets, so far only Gamezebo and IndieGames.com went for a full review. We really hoped to get it reviewed on RPS, but they limited themselves to a short news post, which also slightly mocks the game’s ambitions. I think there’s some genre stigma involved, that so far only Christine Love’s works seem to be able to avoid. Too bad, as we hoped to get to the players from outside of the usual VN circles. Mainstream reviews help to make a proper impression on Steam, too. I also noticed that it was much easier to communicate and explain the game’s values with female journalists, which is — well — not a big surprise, unfortunately.

Our most valuable traffic came from the fans, however. Blog posts like this one, or forum Let’s Plays don’t bring as many people as mentions on gaming websites do, but the traffic is very directed. Average time spent on our website is much higher for them, and people were much more likely to purchase the game after a recommendation from another fan. It shows how tight-knit and niche the VN community still is. Really charming, to be honest.

The sales and prospects: 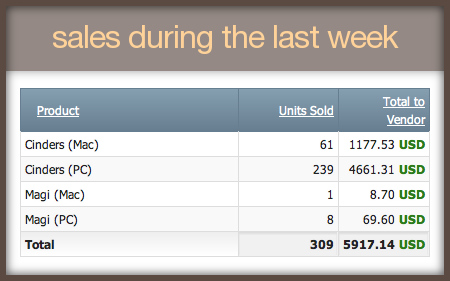 In a bit more than a week, the game sold 300 copies. It’s pretty good for a visual novel, though we still have a long way to go before we reach our goals. We need at least 1000 sales to be able to call this game a success. It still wouldn’t be a very profitable project, considering how long it took, but it would at least give us enough to just scrape by until our next release. Cinders could be seen as an investment then. 2000 direct sales would be enough to make it an actual commercial success.

300 copies in a week make our first success threshold seem reachable, though the sales slowed a bit already. In the first few days, it was 40-50 copies a day, now it’s usually 20-30. It’s probably going to settle down eventually and remain there for a while, but it’s really too soon to make any predictions. So far, it looks like what we do has the potential to be profitable, but we’ll probably have to soldier on until our next release. After that, we should be fine. For some comparison: average gross salary in Poland is around $1200 a month.

We’re also going to approach Steam in the near future and it could potentially shift things quite a bit. Still, we prefer to assume we won’t get accepted and plan accordingly. After all, if we need a distributor to survive we aren’t independent anymore.

We’re pretty happy how it all went so far in general. Though, we still can’t forgive ourselves for the delay. It definitely made everything much more difficult. But what can I say — another lesson learned.

I’m going to remain open about our progress. In a few weeks, I plan to write a bit about how we see our game from the design and storytelling perspective. What went right, what could be better. Then, a few months from now, I would like to do a full post-mortem article about the whole project.

For now, I’ve got to prepare for the Cinders release party at my place. Believe me when I say this is the one thing I can with certainty predict to be a huge success…