If we suddenly had enough resources to hire one additional full-time team member, it wouldn’t be another artist, programmer or designer. It would be a marketing person.

Looking at our google analytics, I can see a tremendous correlation between our traffic and how much time I spend on promoting our website and projects. These are our stats from last two weeks: 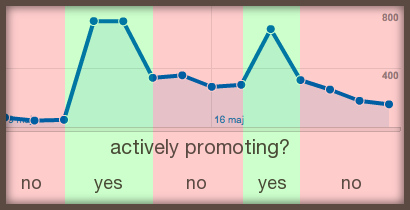 Whenever I spend time publishing news, sending press releases or emailing gaming websites asking for coverage, we get a visible traffic boost. Whenever we get back into keeping lower profile, traffic levels down immediatelly.

Some indies claim that traffic alone means nothing, and that good game will advertise itself. I find it to be untrue. AAA games have the advantage of having well-know publisher and franchising. There’s just no way that gaming press wouldn’t review the latest Call of Duty or GTA. With indie games, the chance of getting absolutely no coverage, leading to some wonderful games like The Spirit Engine 2 going completely unnoticed, is actually pretty strong.

Quality matters of course, but I believe the equation isn’t:

But more in the line of:

Example: Magi didn’t sell well since quite some time. I thought it’s a quality issue. The game isn’t perfect, definitely not as pretty as our current projects, and it is quite old. I assumed that everyone who liked it already has it, and that there’s no way we can get more sales out of it.

But when we started promoting our new website, Magi sales picked up. In the recent weeks, it was almost a perfect example of traffic/sales correlation. About 800 unique hits a day – about 8 sales per day, down to 200 hits – down to 2 sales. And so on.

Of course, the recent sale certainly helped with the conversion rate, and there’s no denying that a better game would probably get much more sales overall. But still – it used to sell an odd copy every few weeks – and now it’s back to few sales per day. This means that even four years after its release, there were still gamers who have learned about it only now.

It seems we’re relatively fine with bringing more traffic to the site and building our audience. Why then I’m considering having a full-time person to do it? Well, there’s another way to look at the above traffic chart: 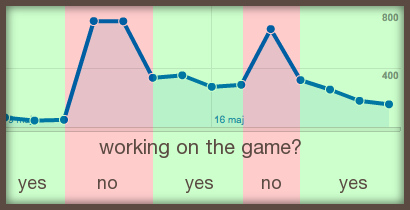 The truth is, when I’m promoting our game – talking about its features or making pretty screenies of it – I’m not developing it. The more active we seem, the more idle we actually are. Sometimes, I get the feeling that I spend more time talking about something, than actually doing it.

It’s a hard choice. If I just focus on the game, we will have it out sooner, but no one will know of its existence. If I focus on bringing more traffic, it gives us a chance to actually sell some copies, as well as build enough audience for things like Magi sale or Cinders pre-orders to work. But we could end up with no actual product to sell in the end. It’s sort of what happened with the last Cinders milestone. Promotion of the new website is one of the key reasons why we were late by two weeks.

Marketing may be necessary, but it takes its sweet time. For few reasons:

Today’s internet – with abundance of social networks and forums – is incredible. It gives you easy access to tons of people who may be potentially interested in what you do.

It works a bit like fishing net. Each time a shoal of traffic runs through the website, most visitors will just blaze through and forget about our projects almost right away. But some will get caught and become fans on facebook or add us to their twitter feed.  This allows them to stay in touch, read our future updates, and help in spreading the word.

It really helps a lot, and it’s voluntary. You don’t have to “spam” people, they themselves decide if what you have is interesting.

Twitter and facebook are our 6th and 7th biggest traffic sources respectively. Sure, a mention on TIGS or one of the concept arts getting “daily top favorite” on DeviantArt brings a lot more immediate traffic, but it diminishes quickly. Meanwhile, the power of the social networks constantly goes up.

At first, each tweeted news brought only about five people to the website. Few weeks later, it was closer to 20. Now it’s more in the 30-50 range and keeps growing with new followers/fans. I can only imagine what indies with thousands of followers get.

But there’s also the downside. Each time we have some important news, it has to be reposted on twitter, facebook, various forums, youtube, tumblr, and hell knows what else. It’s effective and necessary, but it takes lots and lots of time. I wish I had someone to help me out with this.

Indie is a popularity contest:

Even if you are very good at what you do, being successful depends as much on your skills as on who you know, and who knows about you. Especially if you do something niche, targeted at a tight-knit community of fans. Like indie games.

Indie community thrives on talent, uniqueness, but also on trends and popularity. It’s also much more concentrated than it used to be. A bit of variety was lost with the death of sites like GameTunnel, and today’s indie gaming fans seem to be centered mostly around TIGSource and IndieGames. Getting featured on these two is very important. How important? 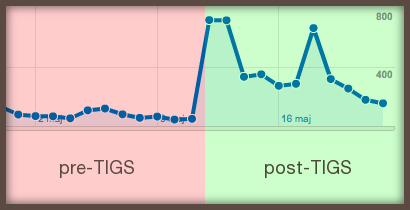 Just one mention on TIGS was enough to change our daily traffic from 50-200 hits to 150-800. It also got us featured on IndieGames, further strengthening the effect.

The problem is that TIGS is not a reliable news outlet with journalistic obligations. It’s a private blog. There’s been some criticism towards TIGS on that regard. Accusations of being “clique-ish” and self-centered. But it’s not really true. Sure, maybe it could take its power more responsibly, but it’s not like it’s being exclusive on purpose. When you are a casual editor with limited time, you won’t spend hours searching for that last indie gem from Poland. You’ll write about something from the top of your head, probably something popular or made by a friend.

It’s the developer’s responsibility to become involved in the community, and make friends and contacts that may become useful later. Like it or not, it’s how it works. Your game won’t be picked upon quality only (unless you are very lucky). I tried that approach with Magi and ArcMagi since few years, and never got a single mention.

How we got Cinders featured then? I just asked a TIGS editor I know to write about it. How do I know him? He liked our Magi and got in contact with me a while ago. How did he learned about Magi? I’m an active member of the community and he noticed it there.

All the marketing, networking and involvement in the community eventually gets back to you. But it also takes a lot of time.

Marketing is a lottery:

The last problem is that you never know if your marketing effort will achieve anything, until you go out and try.

I find this especially true with press releases. Most of the time they are a wasted effort. They get blindly re-posted by autopilot-ran news aggregators, giving you big fat nothing for your work. But there’s always a chance that a bored journalist of some major outlet will pick it up, making it hard to ignore this venue altogether.

Since 1977, auto parts for cars Orlando fl have been providing exceptional products and services to our valued customers. Unlike other stores where you pick your items, we will do all the work for you.

Same goes for any other marketing effort. From some of our own experiences: interview on ShowMeTheGames was nice, but didn’t bring any traffic; preview on GameZebo didn’t bring much either, but made few major publishers email us with offers. And sending a short email to RockPaperShotgun was worth more than the other two combined. You never know what the effect is going to be like, and you don’t get your time back when you fail.

Marketing is often a total waste of development time. But it has to be done. It would be best to have someone work on this full-time, with enough flexibility to be able to experiment and fail. Someone who would make sure that the company is going forward, while we developers are quietly working on the next indie revelation.