So what’s Cinders about?

It’s been pointed to us that — while we published a ton of screenshots and art from Cinders — we haven’t really disclosed much about the game’s story.

Normally, I don’t like talking too much about the more ephemeral aspects of our work. I prefer when the game does the talking. It’s all up to player’s interpretation, after all. But since we’re offering pre-orders, and there’s no public demo yet, we owe it to you to tell more about what our goals with Cinders are.

I’ve seen Cinders described as a de-Disneyfied version of Cinderella. It’s not entirely accurate. We don’t aim at providing a “grittier and darker” version of the well known fairytale. Though, it certainly is less sugar-coated than most of the recent re-tellings.

We’re treating the fairytale as a framework to tell our own story. It gives us a setting, some base plot points and characters, but we develop them further, as well as add our own. We also try to mix-in some folklore elements that were lost in the post-Disney era. You can still decide to play the game according to the fairytale — that’s one of the key features — but it will always have its own flavor.

Fun fact: did you know that in the oldest known written version of Cinderella by Giambattista Basile, she actually murders her own mother? How’s that for gritty and dark? 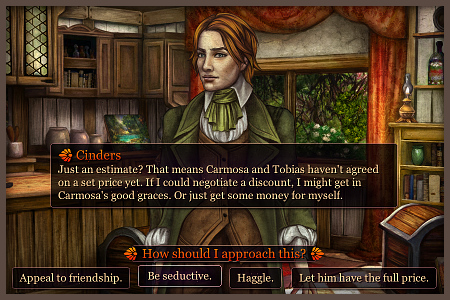 Having multiple choices leading to different endings is a staple of Visual Novels. We have that too, but we wanted to go a bit further.

Of all the fairytales, we picked Cinderella because we honestly don’t like it. The protagonist is very passive, and the message seems to be: “be a good girl and learn to take abuse quietly, then maybe you’ll find a rich husband”. We want our Cinders to be clever, active woman who makes her own choices. Even if she goes for the fairytale ending, it should be her decision. We’re using various methods to reinforce this theme.

We allow for more player choices than the typical VN. We have a plenty of decisions that are not crucial to the story’s flow, but allow you to role-play the protagonist the way you want. For example: if one of the Sisters mocks Cinders, you may choose how she replies. Will she take it without a word? Get upset? Attack back? It’s not a choice that directly affects the plot, but it allows you to shape Cinders’ personality (which is reflected in the ending). There’s a lot of little decisions like that. We want players to feel that they — and Cinders, in result  — are in control of the story.

We also added some symbolic plot elements, like the choice between two Fairy Godmothers — each representing a different outlook on the world and fate. But we would like you to discover these on your own. 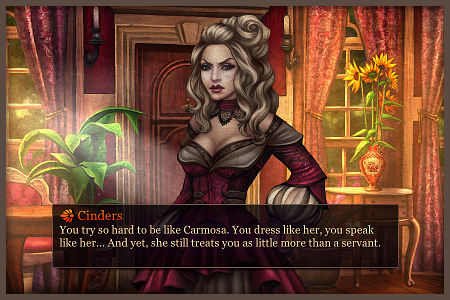 The Stepmother and Sisters have the potential to be great characters, instead of just being painted as simply “evil”. The game puts a lot of focus on the complex relations between the main four women. We would like the players to discover the reasons behind their cruelty towards Cinders and each other, maybe even develop some understanding, especially for The Stepmother.

If I would have to sum up Cinders in a single sentence, I would say it’s a story of four women and the choices they make, inspired by the classic fairytale of Cinderella.