I love writing essay-ish blog posts about game design, but recently I’ve been too busy to do so. And quite frankly, I’m not really in the proper mood. The stress is slowly getting to me and I find myself focused on the mundane rather than the high concepts of making games.

Still, it’s been a while since I blogged, and I thought we should update you on where we are both personally and professionally. Especially as many things are happening right now that can be crucial to our future. 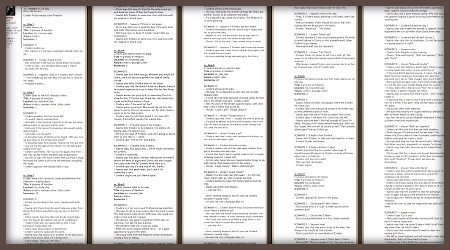 Cinders scene script is quite a beast by now

Cinders is my main focus. Damn, it’s been the main focus since almost a year now. It was in a bit of a turmoil a few months ago, when the rate of new scenes coming in was more that worrying. We’ve had an honest talk with Ayu and came to the conclusion that she might be too busy with her own projects to finish writing in a timeframe that would work for us. We realized we have to hire an additional writer to help us out. Someone who could devote a significant part of their time into this.

We went through a few candidates before meeting Hubert and Agnieszka (I promise to write more about them in the future). They are friends of our artist and were very excited to join the project, bringing in their own ideas on how to improve it. So far everything is going well, and we’re thrilled at the perspective of finally finding someone who could potentially become a more permanent writer for our games, just like Rob is our musician. Thanks to their hard work and enthusiasm, we were able to finally close Cinders storyline, and the missing scenes are coming in at a very steady pace.

If we can keep the current speed, I think we should be able to release the game somewhere in April. It’s not an “official” launch date, but if nothing bad happens, we think it’s a good estimate. The game took too long to be a  meaningful commercial success, but we really hope it’s going to succeed artistically. The more I work on it, the more I find myself pouring my personal experience and ideals into its story. Some of its elements are deeply important to me, and I’m very curious to see how the players react to them.

Future projects and the search for money: 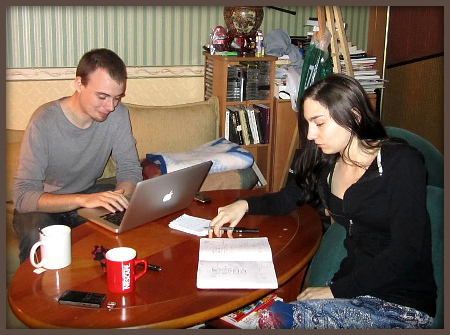 Taken during one of the design sessions for the new project

As Cinders enters its final stage and our involvement in the development lessens, we shifted our perspective towards the future and began seriously considering what our next project should be.

Unfortunately, the long delay with Cinders made a huge dent in our wallets. When I went full-time indie, I had savings for around 6 months of development. The game took twice as much, so I had to spread really thin to get by. If not Magi sales and Cinders pre-orders, we wouldn’t be able to do it (thanks again!). Even if Cinders really comes out in April and sells relatively well, it likely won’t be enough to fill up the hole in our budget that the delay dug. To make the next project a possibility, we’ve had to look into some form of external funding.

Our first idea was to look back at casual games in the vein of Phantasmat. We were mulling over an adventure game since quite a while and even had a rough design, so we decided to finish it up and pitch it to interested friendly companies. Casual games quality bar is set very high these days, and we wanted the game to be really top-notch, so it was a pretty big project, requiring around $150k to make.

All went well and it looked like it’s going to get greenlighted, but then BigFish Games, a major pusher in the casual space, raised it’s Collector’s Edition requirements, making everything too risky for both us and the would-be investors. Hopefully, we’ll be able to make this game in some other way eventually. Maybe as a more traditional point and click adventure. We were pretty invested in the concept. I should also really consider writing a blog post about the downsides of the modern casual market one day.

Our second idea was to find someone to partially fund one of our upcoming MoaCube projects (we have at least two games after Cinders planned ahead). Much less money required, much less risk, but also a much lesser payoff for the investor. We’ve entered negotiations with two friendly indie companies. One deal we had to decline, as it affected our long-term plans too much. The other was much more leeway, but couldn’t supply the full amount required. Eventually, our luck turned as friend’s family offered to borrow us the missing funds. The project can finally get started, without having to worry we’ll starve before it even becomes playable.

I don’t want to talk too much about it yet, but it’s something that should appeal to both Magi and Cinders players. It’s much more “gamey” than a visual novel, but still with an important story component and Gracjana‘s familiar art style. Taught by the Cinders delay, we also want it to be something we can make with just our core team, without having to rely on external contractors. Even if the game is relatively complex, being in charge of the whole development gives us a lot more control over when and how it’s done. 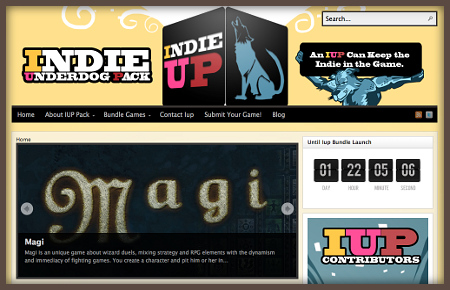 I also started looking into crowdfunding websites, like Kickstarter, IndieGoGo and 8-Bit Funding. Cinders made us painfully aware of how fragile a new indie company can be. We don’t have a steady passive income yet, and probably won’t have it for at least two more games. Any delay or failure poses a serious threat of sending our big dream down the drain.

If we would be able to tap into crowdfunding during critical moments, it would make us feel much safer. After all, it’s the support we’ve got through pre-orders and investment bundles that saved us now. Being based in Poland also means that we need a little less money than western developers to get by.

We plan to run a campaign mid-way through the next project to complete its budget. The more money we can generate, the less we have to borrow, and I personally want to avoid debts as much as possible.

To learn the ropes, I got involved with a crowdfunding project ran by a few fellow indies. The plan is to gather up some cool but less known indie developers, and raise the funds for their upcoming games while giving away their existing ones. So something like a kickstarter campaign + bundle. I’m not sure how well it’s going to work, but I like the overall idea and the chance to learn how it’s done. I’ll surely write more about it when the campaign gets official. Should be within the next few days.

We’ve been through some hard times recently, but it looks like we’re getting back on track. Cinders is progressing at a good pace again, making the next game much more feasible, and we think we know what to do next both artistically and business-wise. I admit I’m very tired and stressed out at this point, but this new year looks pretty promising to us. And the fact that we’re still here, doing what we love, despite all the unexpected problems, fills us with energy to work twice as hard to make this dream a reality.