The evolution of Cinders

It’s obvious that designs evolve. The final game always strays in some ways from the initial idea. I’ve learned it the hard way while working on Magi. What seems to work on paper or in your head, doesn’t always translate well to gameplay. And when you think you finally got it right, playtesting starts, forcing you to change features that you thought are set in stone.

Still, I was surprised to see Cinders evolve so much. And I’m not talking about the game’s design and technical side here (it’s obvious we had to catch up with all the features people are used to thanks to Ren’Py). It’s not a gameplay-based project, after all. It’s a story. Stories shouldn’t change that much during the draft-to-final transition, right? 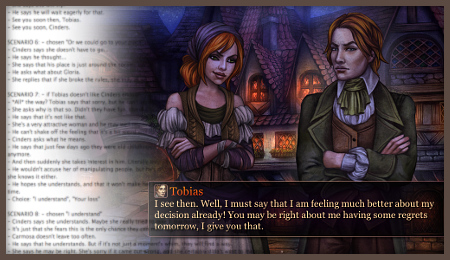 And yet, working on the final scenes for the game, I can’t help but notice how much we derived from the initial concept. As we grew accustomed to the characters and themes of the game, it started becoming more personal, reflecting our own experience and observations. Here’re a few core elements that evolved the most during the development:

From the start, we wanted to give The Evil Stepmother and her daughters some believable personality. Simply being evil doesn’t cut it. Still, we saw them as supporting characters and the main focus was meant to be on Cinders and her potential love interests.

Now it almost seems like the sisters stole the spotlight. They get significantly more screen time than other characters, and the relationship between themselves and Cinders became one of the core elements of the game. Why Cinders can change her life and they can’t? Why they are how they are? Is there a chance to “fix” them? I think it makes for a more interesting reading and reinforces the game’s theme of the one’s choices vs social conditioning.

The game obviously had some feminist overtones from the get go, with the whole ditching the passive Cinderella stereotype thing. But it evolved into something much more engaged. It’s a game about women, doing what they can to gain independence in a fairytale world that isn’t that different from ours.

The Stepmother and Cinders are willing to do almost anything to take control of their lives, just in different ways, while the Sisters are victims of expectations put on young girls. We aren’t really activists, so I’m surprised to see my own story go that way. I really wonder how it’s going to be received.

The game’s theme of choices and free will evolved significantly. Initially, it was a basic story about changing ones fate through conscious decisions, but we found this message to be too naive in the end. Sure, carving your own path is important, but we’re all entangled in the social constrictions left by our upbringing and environment. To leave that out, would be like keeping the original fairytale’s simple morals.

As the story evolved, it became apparent that we need to show that Cinders is actually lucky to be able to decide her fate, contrary to her Stepmother and Sisters.

This was encouraged by the various writers and other VN developers who played through the game. They pointed out that by allowing the player to make all the decisions for Cinders, we make her own character too neutral and indecisive.

We realized that we need to allow for evolution of her personality. Some choices should be made for the players, depending on how they acted earlier. Cinders from the end game should act differently from her initial stoic and lighthearted demeanor. She can become cruel and promiscuous or cold and calculated, depending on how you played. It takes some choices away, but we feel the story is much better if you can see Cinders reveal her true nature (whatever it may be) as it goes.

We’re all very curious how these aspects are going to be received by the players, as they started to become really personal for us. It was great to see some beta testers analyze the personality of the game characters on the forums, and we hope to see more of that once Cinders is finally out. It’s going to be interesting to see the criticism as well.

Now let me put my pretentious beret back in the closet…