Better Gameplay Balance: Beyond the Spreadsheets

When you only start learning how to draw, you doodle. It’s fun and it sometimes even looks okay. Then you begin to grasp the rules of anatomy and composition, and everything changes. Now you know how to visualise something properly. The true mastery, however, starts when you learn how to get away from that “correctness”. Break conventions to focus on what actually matters. Basically, get back to doodling.

In my experience, same applies to gameplay balance. I still remember how I worked on my earliest games. Added whatever seemed cool, balanced it with semi-random numbers, then tweaked things during playtesting. When I began to see game design as a profession and started educating myself, I’ve learned the power of careful planning and making sure the math is sound. But the better I get, the more I realize that numbers are just a basis and good gameplay balance comes from aspects that are impossible to capture in a spreadsheet.

Before I get to examples, a minor disclaimer. Balance is a broad term, so let me clarify that I’m talking about gameplay/strategic balance. Or even clearer: making sure that if two options are available to the player, they are both just as viable.

This one’s pretty obvious, but needs to be mentioned. The simplest way to ensure that all options are appealing to the player, is to give each a unique purpose.

Let’s consider Diablo. It has several missile-type spells: Firebolt, Fireball, Lightning. Each deals ranged damage to enemies, with minor differences in area of effect, mana cost, and power. It’s not a very interesting situation strategically, as one of those simply has to be the best option. Unless you’re fighting fire immune enemies, there’s little reason to use anything other than Fireball. 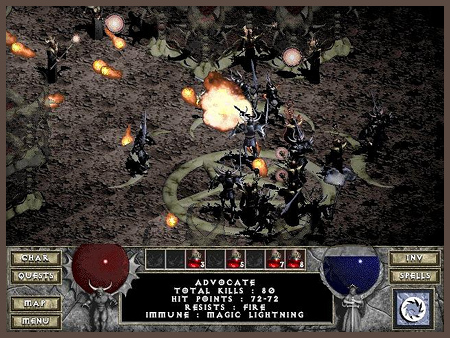 It’s not just the graphics that aged.

But what happens if we give each spell a unique effect and purpose? Let’s say Firebolt sets enemies on fire for a duration, Fireball is powerful but can’t be used at point blank, and Lightning stuns monsters for a few seconds. Way more interesting. Even if numerical balance if off and Lightning costs too much mana, it’s still useful when you want to get away from enemies (possibly to set them up for another Fireball).

A good positive example would be weapon design in modern shooters. Three assault rifles with different stats would be boring, so you usually get a generalist rifle, a shotgun devastating at close range but useless at a distance, and a sniper weapon with the opposite qualities. Regardless of their exact stats, all weapons are going to be useful in specific conditions.

The logical next step from giving every option a unique purpose, is to make them work best in tandem. I discern two types of synergies: soft and hard.

Soft synergies emerge naturally from game mechanics. The tried-and-tested RPG cliche of tank + healer is such synergy. It’s never said that you need to have at least one knight and one priest in your party. They just benefit greatly from each other’s presence. Even if designers screwed up, and the knight has more interesting skills and gear selection, you’ll still want to use the priest to get as much as you can from your powerhouse character.

Hard synergies are formed by specific gameplay mechanics designed to make two options compliment each other. Dragon Age 2 works like that. It has two melee classes: warrior and rogue. To make sure that you’ll want to keep both in your party, there are several powerful skills that the rogue can use on “staggered” enemies. The caveat? Only warrior can apply stagger. 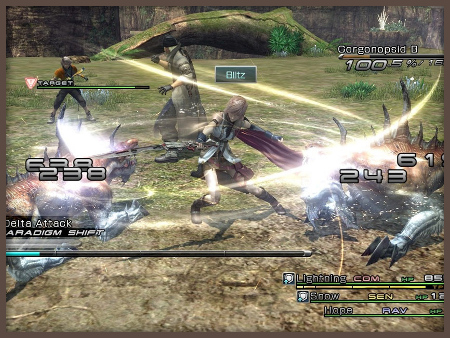 So there’s something worthy in this game after all.

Similar thing happens in Final Fantasy XIII combat system. It features a bar that fills with each consecutive hit, increasing damage dealt. Mages are good at raising this bar, warriors can prevent it from falling down. So you need both, regardless of how well their skills are balanced.

Something designers often forget, but has a great impact on the players. I can point to my first commercial game, Magi, as a perpetuator. It features two basic attack spells: Magic Missile is used for quick and steady DPS, Fireball is slower and overall weaker, but breaks shields. Both have their unique purpose. But I’ve noticed that many players stop using Magic Missile once they unlock Fireball. Why? Because it’s a friggin’ ball of fire that goes boom! Likewise, very few players ever used curse spells, despite me making them somewhat overpowered in the end. It’s just that stat decrease isn’t as awesome as blasting away with missiles. 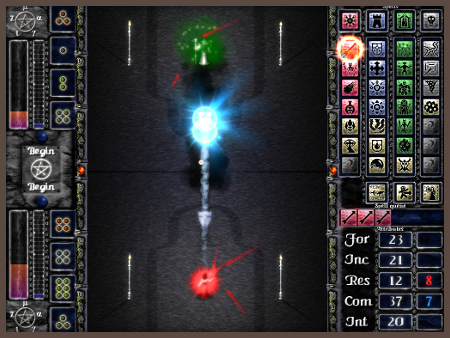 Players usually don’t know the underlying mechanics or how the numbers interact with each other. But they do know that huge explosions are cool, and it affects their tactical judgement. After learning this lesson, I try to make sure that all options are fun to use and have clearly visible effects.

For instance: in ArcMagi (the planned sequel) we replaced a curse that lowered opponent’s defenses with one that makes them spontaneously combust whenever they are hit. The effect is the same: increase of DPS from your other spells. But hell if it isn’t ten times as cool!

In Starcraft, a Zerg Queen can destroy any ground unit with her Spawn Broodlings ability, creating two melee fighters as a bonus. On the other hand, a Guardian can attack ground targets for 20 damage a shot. And yet, these two units are balanced. Queen has you manually pick her ability, check if you have enough mana, then click the desired victim. Meanwhile, Guardian just attacks on its own and takes less effort to micro-manage. This is balance by convenience. 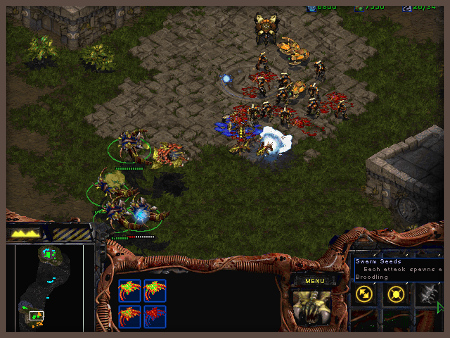 Still holds up in so many ways.

Fighting games are another great example. A complex 10-hit combo or a special may deal more damage, but in the heat of actual battle you’ll often rely on much weaker but simpler to execute techniques. Or you may simply be too lazy to spend hours practicing those 10-hit finger twisters when there are other options available.

Because that’s the thing — we, humans, are lazy. We tend to chose convenient solutions, even if they aren’t exactly optimal. Manual targeting, difficult to master input, or even something as simple as walking slower when you wield a big weapon, can be seen as a huge hindrance and used to balance options beyond their numerical values. The nice bonus of balance by convenience is that it rewards skilled players who are willing to deal with all the extra hassle to master the game.

This is a very powerful technique that’s especially appealing to small indie developers, who have absolute control over every aspect of their game. Sometimes the best way to make an option viable is to alter the environment it’s in.

Consider a theoretical cover-based shooter with a shotgun weapon that’s heavily underused, despite killing everything in one shot up close. The thing is, this is a cover-based shooter. Enemies don’t come up close. They keep their distance and hide, occasionally firing a few shots before getting back into cover. Under these circumstances, an accurate long range weapon that can pop some heads is a preferred choice. No matter how crazy the shotgun’s stats are.

However, if you were to add melee enemies, who charge or ambush the player, and if those enemies would be heavily armored– Man, shotgun sure starts looking like something worth carrying! 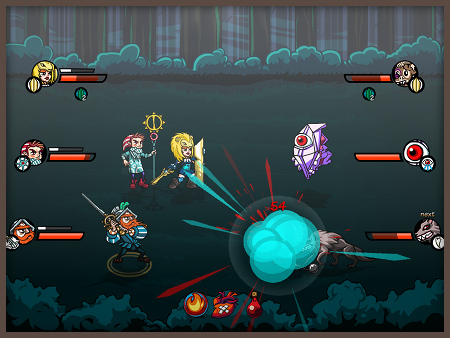 A real-life example would be an issue I had with my Bonfire. I’ve found out that parties based on buff/debuff stacking were too powerful. I could nerf buffs, but that would make classes using them quite unattractive. Besides, they were only overpowered in a particular combination. In the end, I added several enemies that feed on buffs or can turn them against the party. You can still use the same strategy and have fun with it, but now it comes with the risk of running into something that’s going to be very hard to kill without a drastic change in approach. Not only it solved the issue, but made the game more tactically engaging.

Balance by lack of balance

Yes, lack of balance can be a conscious design choice as well, and it often works well. 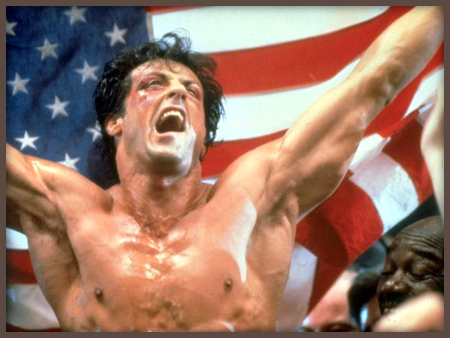 Arcade fighting games often include characters that are weird, tricky or simply less optimal to play and stand little chance in any serious tournaments (but if someone does win using them…). Likewise, there are characters who are easy to win with, even for beginners. In a way, this works as a hidden selectable difficulty level. Some players like to battle against unfavorable odds, others prefer simpler way to victory.

As long as your game has enough viable options to make it varied, don’t feel bad that there’s some underdog choice that only a select few pick (and probably enjoy the game more for it). Haven’t you seen Rocky? People love the underdog!

Of course, if numerical balance is way off, even the best psychological tricks won’t work. There are also the hardcore players who crunch numbers as well as any seasoned designer, if not better, and you need those. That’s why next week (or so…) I’m planning to publish the second part of this article with tips on how to handle the numbers game without going crazy.

EDIT: The next part is up.

If you found this essay helpful, please consider following me on twitter.