Blog is back + personal update

My life is slowly getting back into balance, and I finally got more time to write. It seems like the right time to revive the blog! Google Analytics also says it’s good for our traffic ;).

With such a long period of silence, I guess I owe you an honest update regarding our recent circumstances.

I bet that a lot of you just want to know how Cinders is going, and are we really working on it as hard as we can. Short answer: yes.

Basically, I’m not doing anything else at this point. Aside from the occasional session of Demon’s Souls in the evening, I spend my working days writing the remaining scene descriptions. A sort of “screenplay” for the game. With each scene, scenario and dialogue line listed and outlined. It looks like this: 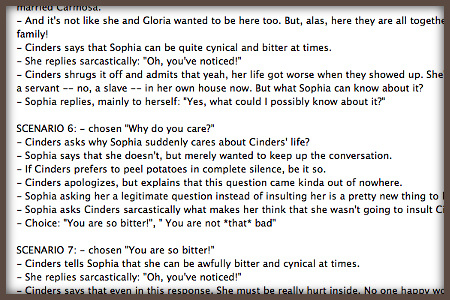 These descriptions are then sent to Ayu, who uses them to write actual scene scripts used in-game. 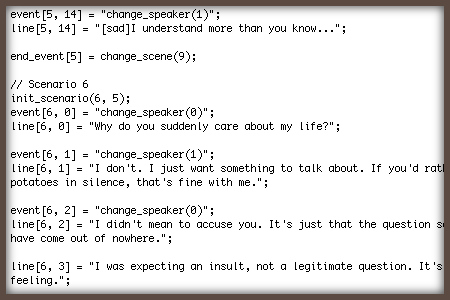 I admit I underestimated the amount of time and effort that goes into writing a good an lengthy story, with multiple choices on top of that. It’s the main reason behind the delay, and I’m terribly sorry for that.

The good news is that I’m starting to realize that Cinders is going to be significantly larger than most indie visual novels. Not only in length, but also in the range of available options and possible outcomes caused by player’s actions. I try to make every single choice and event have some impact on the story. Even if it’s minor.

For example: trying to be nice to one of the stepsisters in the beginning may make her return a small but friendly gesture later on, and will be referenced in casual dialogues between the girls. On the other hand, if you manage to impress the stepmother with your actions (yes, it’s possible), one of the sisters may feel jealous, which is going to affect all further interactions with her. Some conversations can go in up to 20 different ways, depending on the little things you did in the past.

It takes time to write all that, but I’m really happy with the results. After all, visual novels don’t have much going for them in terms of gameplay other than the player choices. I want to make sure that we do that aspect really well.

I think that our venture into indie gaming just entered its most stressful stage. I knew it would eventually come, but — well — it doesn’t make it any less stressing ;).

The game — as per the oldest game development tradition — is delayed. My bank account has almost dried out, and sales of Magi and Cinders pre-orders are unable to keep us afloat for much longer (by the way, many thanks for all the purchases guys; if not you, we would go under a long ago!). The pressure to finally release Cinders is very strong, but at the same time, compromising the quality of the game is out of question. On top of that, I’ve been ill for two weeks now, which certainly doesn’t help.

I also came to the painful realization that I brought too much responsibility and work upon myself. Coding, designing, writing, promotion, updating the website, running the forums, contacting the press and portals, maintaing schedules, giving support to customers, testing the game… I essentially ended up doing everything that’s not art, music or dialogue writing (to some extent). It’s just too many tasks for a single person when you are in a team, and I should be more adamant when it comes to sharing our workload.

Rob and Gracjana are long done with their work, and basically have to wait while I finish the game. It puts a lot of pressure on me, and it’s simply annoying for both sides, too. They have to wait for their money to start coming in, I feel like I’m a one-man studio again.

The original plan for MoaCube was to make it a sort of partnership between me and Gracjana. We make games together and then simply split the profits in half. I liked that — it’s a simple solution, and one that works for people who are also good friends in real life. Unfortunately, it’s clearly not working out as well as we hoped, and I’m not sure what to do about it yet.

Despite all that, I’m not complaining. Yes, indie game development is not all glamour, freedom and pantless Fridays (and groupies!). It has its dark sides. But this was to be expected, and I’m trying to keep a positive attitude.

I know that things are only going to get better from here. The game is close to release, I’m actually really proud of how it’s shaping up, and while we’ve made some mistakes, we are constantly learning from them. Further projects should go much smoother.

And you know what? I still love the lifestyle! Not having to get up early in the morning compensates most any hardships ;).

I also got involved in a cool game design workshops/jams initiative. Something I never had enough time for, when I was working in the office. It’s fantastic for getting those creative juices flowing and boosting your morale. I intend to write more about it soon, as the idea really deserves a full article.

Having the artist and the musician idle, we also started thinking about our future projects.

It’s going to be another story-heavy fairytale adaptation, albeit with more traditional gameplay element than Cinders. I think it should appeal both to VN fans and our Magi audience. Not much more I can say about it, other than that I’m very excited about it. Gracjana is working on some concept art right now, so maybe we will have something to show soon.

A game developer friend is also considering doing a visual novel for us with a very interesting premise and art style. It’s all still very uncertain at this point, but I really hope it will work out. I think his idea is great and I love his art. Here’s a nice preliminary concept art for one of the characters: 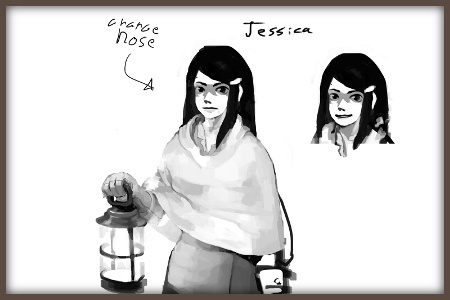 So yeah — we’re working hard, Cinders is steadily progressing, and while we’re experiencing some hardships, I firmly believe the future ahead of us is bright. The weekly blog should be back from now on, too.